Carlos Espalier: The Alamo Defender Who Never Was...Sort of

The story of the Alamo is shrouded in myth and legend - and myth and legend are nothing if not prone to confusion, error and controversy. This is the story of one of those controversies, and how my research has, I respectfully suggest, finally solved it.
Among the lists of the defenders of the Alamo are two men with similar names: Charles Despallier and Carlos Espalier. They are, in fact, the same man. This is not the conventional wisdom. Older historians - and the Handbook of Texas - assert categorically that they are separate individuals. As the Handbook says, "Because of similarity in names the claim has been made that Carlos Espalier and Charles Despallier are the same person, but the claim is not accepted by most historians."
The Handbook elaborates:

Suspicion arose regarding the Espalier-Despallier mix-up as early as 1856. Newspapers such as the New York Daily Tribune and The Weekly Telegraph (Houston) published articles in which they spoke about the matter in rather strong words—they suspected a fraud.

The Handbook then dismisses this theory, and asserts that Charles Despallier and Carlos Espalier are separate individuals. Here is how authors Rasmus Dahlqvist and Bill Groneman make the case:

Espalier's aunt was Carlos’s sole heir and was granted lands for his service. Some sources mention her as Doña Guardia de Luz, but her real name was Luzgarda Grande.

The Handbook then notes that Luzgarda Grande was the daughter of Luis Grande. Furthermore, Luis's son-in-law was Bernard Martin Despallier, a Frenchman in the Spanish military service in Louisiana who had moved to Texas. Despallier had married Grande's daughter Candida Grande. Then, with inexplicable logic, the Handbook concludes:

So Luzgarda and Candida were sisters, making Carlos and Charles first cousins.

This is logical nonsense. The only way the two women being sisters would make the two offspring first cousins is if Carlos and Charles were their respective sons, not, as they actually are, a son and a nephew. Or, if there was a third sibling, they could be cousins, but there is no such person in any record. Since Luis Grande had only two daughters, and one of them had a nephew, the latter by definition had to be the son of the other, making Charles and Carlos brothers...or the same person (Since we know Bernard Despallier's children precisely, it must be the latter). I will graph it out to make the relationship clearer.

Another argument put forward for the claim that they are different individuals is that Carlos was allegedly 17 and Charles was 24 when they served at the Alamo. However, birth records only exist for Charles. This is therefore not a valid argument, since the age difference is nowhere documented and may have simply been a guess or incorrect statement on the part of Carlos's heir (his aunt).

Where "Carlos" Came From

Antonio Menchaca said he knew everyone at the Alamo, and stated Charles was Carlos: “I always heard him called Carlos Espalier and by no other name. I have seen him frequently sign his name Carlos Espalier.” The confusion likely stems from Carlos/Charles’ relationship with his aunt Luzgarde Grande, whom he actually called “mother” in Menchaca’s presence, despite the fact that Menchaca knew her to be his aunt. Thus, the man, whose father and mother lived in Lousiana, and aunt lived in Texas, would apparently use the American/French "Charles" in the former, and once he crossed the border, revert to "Carlos" among Hispanic Texans and live with his aunt, literally as her son. (Her only son by birth having already died).

The Origin of the Name

Despallier is of course a French name. The construction comes from the French “Des Pallieres” or “D’Espallier” and means "From Les Palliers" - today a ghost town - located south of the commune of Les Loges-Marchis. 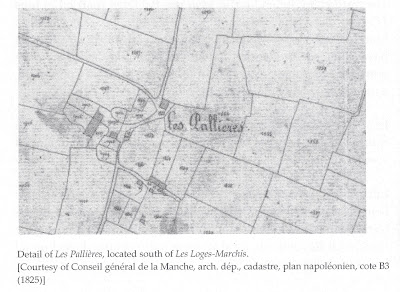 The name is rare even in Europe, where it seems a family from this town who moved from there, adopted it to indicate their origins. As Rasmus Dahlqvist notes in his own biography of Bernard Despallier,

Research in various archives taught me that the D'Espalier family only appeared around 1745 in Belgium. The surname was written in many different ways: Despallier, Espalier, even Spallier.

Thus, "Espalier" is merely a variant of "Despallier" and moreover, one more likely to be embraced by non-French speakers, who found it difficult and confusing to use names with apostrophes in them. Indeed, this is exactly what happened in Spanish Louisiana, where Bernard Despallier settled, and in Texas, where he moved in 1806.

That Espalier was the prefered Hispanization of Bernard Martin Despallier’s name, and that he was the only source of this name in Texas is obvious from a search of the Bexar Archives. I have a keyword-searchable copy of the Robert Bruce Blake Collection of the Bexar and Nacogdoches archives, and located nine volumes in which the name "Espalier" appears. With one exception that seems to be an error (a "Bautista Espallier" who never recurs in any of the 75 volumes) every one of the more than three dozen occurances of the name in the official Spanish archives is a reference to Bernard Martin Despallier, or in two instances, his wife.

*Note: the D or Dn. before his name in these references is "Don" the Spanish honorific.

If that isn't enough, this deposition from a Spanish interrogation should make it absolutely clear, since the person questioned is Luis Grande, father of Luzgarde and Candida:

Bernard Despallier is, in most occurrences in Spanish, Bernardo Espalier, and this is a unique name on the Texas/Louisiana frontier. Any children with this name are his and only his.

It is likely that both Charles/Carlos’ mother Maria and her sister Luzgarde (one living in Louisiana, the other in Texas with a near adoptive relationship to her nephew) filed separate pension claims on his behalf, using different variations of his name, either through ignorance of the other’s claim, or through fraud.

Either way, Charles and Carlos are the same man. In fact, you can read about him on my blog here:

Thus, all of the lists of Alamo defenders, including the one on the Alamo Cenotaph - and the Alamo's own website - are wrong.

Now, I understand that this may upset some people. After all, Tejanos excitedly claim Carlos Espalier as one of their own, a native son who died at the Alamo. And Louisianans claim Charles. The good news is, they can both claim him.

After all, though his father was French, his mother was Candida Grande, of Texas, and her father, Luis Grande. Luis, who delivered his son-in-law Bernard Despallier's propaganda in the 1811-13 revolution, was in fact executed for revolutionary activities, almost certainly in the Alamo. Thus, Charles Despallier, aka Carlos Espalier, the Alamo defender, likely died within yards of where his grandfather did, both as martyrs to the cause. Combined with father Bernard's service, this makes him the only third generation fighter for Texas liberty. That's something to be proud of, whether you're Charles or Carlos.