Travis' Letter and the Ghosts of 1813 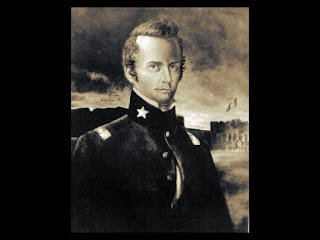 Today marks the 185th anniversary of William Barret Travis' letter from the Alamo. Of course, any excuse to reprint it is a good one. Here it is:

To the People of Texas & all Americans in the world —

I am besieged, by a thousand or more of the Mexicans under Santa Anna — I have sustained a continual Bombardment & connade for 24 hours & have not lost a man — The enemy has demanded a surrender at discretion, otherwise, the garrison are to be put to the sword, if the fort is taken — I have answered the demand with a cannon shot, & our flag still waves proudly from the walls — I shall never surrender or retreat. Then, I call on you in the name of Liberty, of patriotism & & everything dear to the American character, to come to our aid, with all despatch — The enemy is receiving reinforcements daily & will no doubt increase to three or four thousand in four or five days. If this call is neglected, I am deter mined to sustain myself as long as possible & die like a soldier who never forgets what is due to his own honor & that of his country.

Travis' letter, and indeed the entire Alamo stand, on its face is full of bravery and bravado, but many have often wondered to what degree it was bravery or simple bombast. Did Travis really know what was facing him? Did he perhaps think that there was still hope that he could hold out and win? Historians and laymen alike have analyed and debated this. But in trying to understand Travis' stand, a huge bit of context has been universally lacking: Texas had been here before.

Twenty three years before, a ragtag army of Americans and Tejanos had gathered at the Alamo upon the news of an enemy approaching from the south promising to crush them without quarter. How they acted and how their own battle turned out held key lessons for Travis - lessons he undoubtedly knew.

First, let me step back, because most of my readers will know none of this. 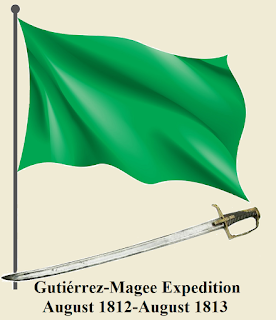 In the 1812-13 revolution - frequently referred to as the Gutierrez-Magee Filibuster - a band of American volunteers crossed the border to make common cause with Tejanos in their rebellion against Spain, defeating the royalists decisively at the Seige of La Bahia and the Battle of Rosillo before declaring the independence of Texas (as a Mexican state) and passing Texas' first constitution in April 1813. The mixed Anglo-Tejano army then defeated a first Spanish counter-attack against San Antonio at the Battle of Alazán in June 1813, but were crushed by a second one at the Battle of Medina in August of that year. In that battle, the republicans were routed, pursued mercilessly, and shown no quarter. Among the officers in the Spanish force that dealt in such blood and mayhem was a young officer, Lt. Antonio Lopez de Santa Anna.

Of course, most Texans and Americans today know almost none of this earlier revolution. But that is not true of Travis' generation. The settlers who came to Texas under Stephen F. Austin and other empresarios knew about the first revolution very well. That's because many of them were veterans.

My research has uncovered 18 verifiable survivors of the 1812-13 revolution who settled in Texas, and there were undoubtedly many more. Travis undoubtedly interacted with them and had ample opportunities to learn their stories. Some were prominent citizens of the Texas colony and later republic, like James Gaines and Warren D.C. Hall. Republican Veteran Aylett Buckner was one of the Texans killed in the 1832 Battle of Velasco, and Travis almost certainly knew him well.

But the closest connection Travis had to the 1813 war was his next-door neighbor.

Travis came to Texas in 1831 and settled in San Felipe de Austin. Though he traveled across Texas as a young lawyer, this was his principle residence for the next five years. San Felipe was a small town, and everyone knew everyone else. Travis set up his law office in a small house next door to the office of one Goodwin Brown Cotton.

Cotton himself was a veteran of the first revolution. The young man from Louisiana had come to Texas with the Cuban rebel José Álvarez de Toledo, and helped him wrest control of the rebellion from its initial commander, José Bernardo Gutiérrez de Lara.  He likely worked as an apprentice to a printer from Philadelphia, Aaron Mower, who set the type for the first paper in Texas history, the Gaceta de Tejas.

Cotton likely served in the Battle of Medina himself and fled with the rest of the republicans following the defeat. He returned to Texas in 1829 and reprised Mower's newspaper, simply changing the name to English: The Texas Gazette. This he published in a small house adjacent to Travis' law office.

Through veterans like Cotton and others, William Barret Travis would have heard all the horror stories of Medina and its aftermath. It was the bloodiest battle in Texas history. Possibly as many as 1,000 rebels were killed on the battlefield and others were hunted all the way back to Louisiana. In the brutal conquest of San Antonio that followed Medina, between 1/4 and 1/3 of the population of Texas was killed or exiled.

So, when one reads Travis' bold words, it is important to note that these are the words of a man who knew without a doubt what was in store for him. Though he hoped for relief and a long seige - the Republicans of 1812-13 had held up at the Presidio La Bahia for four months - he knew it was a long shot, and he knew what Santa Anna, who had been with the Spanish Army in its brutal conquest 23 years earlier, was capable of.

Victory or death, therefore, meant exactly that. It was no bombast.