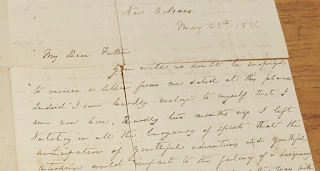 In 1836, a wave of "Texas Fever" swept the United States and young men from across the country rushed to Texas in an enthusiastic response to the Texas Revolution. A similar wave of volunteerism had come the year before, with tragic results. Many of these early volunteers died at the Alamo and Goliad. But when news of these atrocities reached America, a new crop of volunteers headed South.

One of these was Reuben Ross, Jr.  Reuben was no stranger to Texas. His uncle who he was named for, Reuben Ross, fought in the 1812-13 Gutierrez-Magee Expedition, which sought to aid Mexican revolutionaries in their efforts to free Texas - and ultimately Mexico - from Spanish dominion. He briefly became the commander of the Anglo volunteer contingent before his Tejano girlfriend in San Antonio alerted him to a plot to assassinate him. He fled and thus avoided the fateful Battle of Medina in August, 1813, in which the Spanish crushed the revolutionaries and hunted down the survivors, Anglo and Tejano alike.

Ross Sr. returned to Mexico after Mexican Independence in 1821, visiting Mexico City and arguing for a pension for his revolutionary service to Mexico. (This is a fascinating topic and I'll write about it in the future.) But while he was in Mexico, Ross was killed by highway robbers and his dream of earning land rights in Texas and settling down as a Mexican Citizen were dashed.

Reuben Ross, Jr. had grown up on his namesake uncle's stories and was still a child when his uncle died in Mexico. Thus, unlike most Americans who had little knowledge of Texas, Reuben Ross, Jr. clearly had a romantic vision of the province long before the Texas Revolution.

Hearing news of Alamo and Goliad, he penned a letter to his father. The latter thinks the son is studying law, but in his letter, Reuben Ross breaks the news. He's going to Texas instead.

"...for I begin to feele [sic] for my own credits sake at least that it was nearly time should I remain at the Law I think I can obtain license by the Aprile [sic] Court but I confess to you I have recently thought a great deal of another profession which with your apropation nothing could prevent my adopting which is that of arms--You see the enemy has at last appeared in Texas & war is inevitable."


Ross tells his father that he can't even focus on his studies. All he thinks about is Texas.

"The present state of affairs in that country has almost unfitted me for study. The last intelligence brought us an invitation from the Commander in chief [Sam Houston] calling upon the people of the United States for Volunteer Assistance -- and if I have a wish paramount to all others soley with regard to my own destiny--it is to make [a military career] in the acceptance of that invitation.

"There is now the only field for youthful enterprize and hundreds from all quarters without Capitol [sic], Profession or Occupation will eagerly avail themselves of the advantages offered..."

Ross's brother John had already rushed to Texas, and now Reuben would join him. He made his way by land to Texas and for what he hoped was martial glory. Entering Texas, he found families caught up in the Runaway Scrape and his group of volunteers accompanied them some time to protect them. Finally seeing them safe, they moved on to San Jacinto but arrived a week after the battle, missing it entirely. Nonetheless, Reuben Ross wrote a letter to his father describing the aftermath of the battle which itself is rather extraordinary. Here it is in its entirety:

You will no doubt be surprised to receive a letter from me dated at this place. Indeed I can hardly realize to myself that I am now here. Barely two months ago I left Natchez in all the buoyancy of spirits that the anticipation of youthful adventures and youthful enterprise would impart to this feelings of a sanguinary being. I travelled [sic] into this land of Texas with the imaginary prospects before me of advancement of fame and of Profit and I am now after the lapse of but a few days in New Orleans writing down my disappointments. I will give you in a few words (as I know it will interest my father) a detail of my hopeful adventures. I left Natchez an the 5th of [April] in company with Judge Quitman and sixteen Natchez Volunteers for the seat of war in Texas. On the evening of the 11th we halted 8 miles east of Nacogdoches and met a report that the enemy

from two to three thousand strong Mexicans and Indians were marching down upon that place. We moved on in the morning and found the road literally covered with families and the above reports confirmed by [unintelligible] sent out to raise troops for the the defense of the town. We held a consultation the result of which was an offer of our services through Gov. Quitman.[1] To the military commandant for the protection of the family [unintelligible] on the road – The proposition was accepted and we rode in. Arriving in time to save the town from burning which was contemplated and the subject
of debate when our proposition reached them the occurrences transpiring here are hardly worth your attention. Suffice it to say that since days of anxiety of false alarms and the fatigues of watching and scouting terminated our defense of Nacogdoches against an imaginary foe. And likewise terminated our prospects of more useful service to Texas or advantage to ourselves. It was that ill spent time that deprived us of a participation in the famous battle of San Jacinto.
We reached head quarters on the 28th and I visited Gen’l Houston in his tent an hour after, he was prostrated From a wound he had rec’d in the ankle and exceedingly Feverish and fretful. I remained but a short time and left him [unintelligible] at the changes that so short a time

seemed to me to have made in his appearances, manners and disposition, i subsequently saw him but his mind was too much occupied with subjects of  higher importance to entertain or give consideration to our which would [unitelligible] only me. I had no inducement to remain, it would have been an unpopular measure perhaps to have his  commissioning any who had not participated in the recent victory. It would certainly
have been impolitic in such a one to receive them. The Army of Texas – including most of the officers consists of poor and illiterate men they are extremely jealous of their authority and no kind of harmony existing between them. I had only the choice to enlist
as a private soldier and be stationed at [unintelligible] point perhaps for months. (for we considered the war as being closed) or return to the united states – my pride would not acknowledge a subjection to the orders of such as I saw in authority there, and I departed. Had I been in Texas a month previous to the battle I should have been there now I doubt not as I wished. I came over in company with Gen’l. Houston and staff. The distinguished Mexican prisoners I saw frequently and became well acquainted with several of them Santa Anna with all his villainy is a most noble looking fellow if you imagined him the greatest in Mexico. You might go there and pick him out at a glance from a crowd of ten thousand. I met John [his brother] here two days after my arrival he is in our business he will complete by tomorrow and we go to Natchez
I will write you again shortly.


The full letter, in the archives of the Briscoe Center in Austin, Texas: 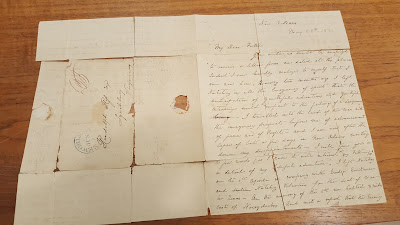 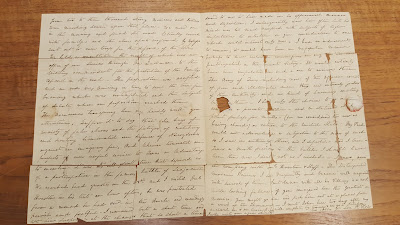 Posted by James Aalan Bernsen at 10:06 AM